I adore words, and since all logic is lost on me, I studied them up to Big Girl years. Yes, I was the devil-may-care sort still doing Latin, aged 17. Loved a bit of Horace.

So when I decided to leave my job largely in the pursuit of relearning French words, I thought that three months would be ample time in which to do so. It’s really not.
Other fallacies include that I have a good accent, and I won’t feel like an ejit 90% of the time. But more on those later.

There’s this little graph we were given at the start of our programme showing a zigzag of emotional state. Troughs and peaks eventually creeping to a plateau, signalling home time. 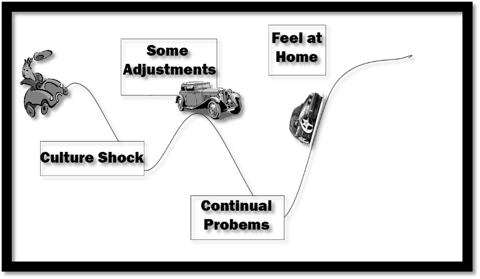 I mean, look how ridiculous this is. The cars, the patronising stickers.

I’ve not looked at it since January and it still feels me with pity and disdain. Irritatingly, it turns out it was pretty accurate. I’ve been up and down more times that I can count, emotionally and linguistically.

Learning another language made my mother tongue feel rather precious. Sure it’s not smooth and lulling like French, but I could say exactly what I wanted, with a library of vocabulary and without sounding like a child/talking toy dog. I could make a joke if I fancied it.

My former job too, depended on obsessive scrutiny of colons, commas and clauses (see, alliteration and a bad joke). While or whilst, stationary or stationery; if there was a mistake in copy, I’d be trying to Beagle-sniff it out. Lost the Latin and picked up an equally cool and suave moniker. Grammar Weasel.

So learning a language again, every day, full time, felt like taking off a prefect badge and putting on a reception bib. Even with an A-Level I returned to infancy in French. The fastest way to assure myself of my incompetency was to make it clear that I’d not touched French since I was 18. Eight. Teen. An idea made ironic with an actual 18 year old in our group. All the howolds I got in my first week were not well-received. For those in Alès that still don’t know, I am 26 and therefore born in the eighties.

Given by English/French teachers in their spare classes, it was impressed on us that the lessons were more a confidence boost towards having to speak to actual French people when our internships began.

So, 60 hours of lessons and here are the key points:

*More idioms than you can shake a French stick at.
‘C’est la fin de la haricots!’ – ‘It’s the end of the world!’
‘Se lever avec les poules’ – ‘Up at the crack of dawn’
‘Ce n’est pas de la tarte’ – ‘It’s not a piece of cake’
The majority include a reference to cats, chickens or the number 36 where possible.

*Many tours of Alès. Specifically information about the town’s mining heritage; including the ‘colline’ (hill) made from ‘bad coal’ which smokes when it rains, and les jardins du Bosquets with its pretty wallflowers and sous-vêtements fondling teens.

-Pulling the skin under your eyes down with your finger and staring at someone to indicate that they are lying. I don’t know the origin of this, but it’s fun to do.
We dubbed it ‘Lie Eye’.

-TAC, TAC, TAC refers to the noise someone makes while writing on a computer or checking a list. Or when they want to make a noise.

-Waving your hand over the top of your head announces that something is boring and you’re over it. The exact same way an English person would if they were describing something as over their head / confusing. Which is itself, confusing.

-Closing your fingers together in a pincer shape and extending the arm away from and towards you. This signals fear.

-When people say ‘Ooh la la’, and trust me they actually do, it’s paired with an Ali G-style booyaka finger clack. I was impossibly happy the first time I saw this.

*We weren’t given the grammar we desperately craved; the types of salt found in Cevennes wasn’t so important to us, we wanted the subjunctive, pluperfect and passé composé – neat and straight into our eyeballs.

*Aside from pronouns, going back to school offered an important lesson in French teens. Boys with tar-coloured Mohawks, slicked up with gravity-defying gel, and pencil-thin girls wearing high tops and parkas encircled the gates; dragging on Marlboro Reds in between limb-entwined kisses. France has Durex vending machines on every street corner for good reason.

Previous Post 6 Hours to Snow (and the World’s Most Perfect Crêpe)
Next Post Learning the Language: Pronunciation & Faux-Pas