I’m not one to care for the restaurants du jour. 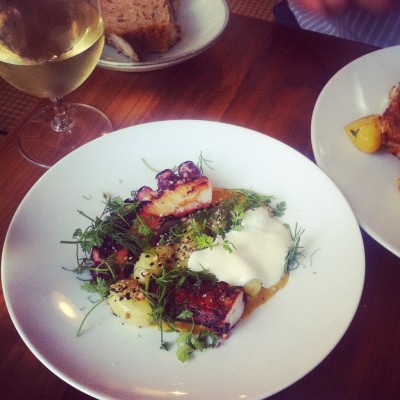 What really spikes my interest is when a name is consistently on the must-eat-at lists of Parisian foodies. Le Servan is one of those.

With true Parisian cool, their site reveals nothing more than the address. No weekend service, telephone-only booking.
So far, so intrigued…

Founded and run by sisters Katia and Tatiana Levha — the latter studied under Alain Passard of L’Arpège and Pascal Barbot of L’Astrance — whose Philippines roots have created an impactful and energetic menu. Found on the corner of rue Saint Maur in the 11eme, I trotted down the road to see for myself why Le Servan was considered a culinery gem.

Always one to be ten minutes early, I waited for my father with an organic sparkling rosé. Half an hour (sorry, patient waitstaff) of unfussed-over tranquility. Always a good sign.

The apple never falls far from the tree — Father and I both wanted the same thing, so I ordered two appetisers to his entrée. Le Servan’s sweet chilli mussels have become a signature, so I opted for that and by the black pudding wontons which seemed to controversial to pass up. For me, the wontons came out on top. The rich and nutty black pudding perfectly matched the crisp wonton shell. I could have eaten ten.

Our double appetiser / entrée combo seemed to cause confusion and the squid starter arrived at the same time as the main dishes, but frankly, it was good enough to excuse the hiccup. Grilled and set on a smoked curry sauce with new potatoes and yoghurt. My monkfish with yellow courgettes and pomegrante was a calmer contrast to the powerful starters, no less finely cooked (and what a beauty of a fish) but I was more enamoured by what I’d eaten earlier. Le Servan was beyond worth the wait. This is definitely one restaurant that’s having its moment again and again.