I was always under the impression that spinning was for obsessive compulsive gym nuts or sadisitic psychos that enjoyed being verbally berated whilst sweating. The image of an overbearing meathead screaming abuse while I’m clamped to pedals flailing out of my control was what kept me a spin virgin for so long. ‘This is a ridiculous activity for masochistic loonies,’ I thought. ‘Exercise is supposed to be fun – right?’ Wrong.

Out of curiosity and laziness to walk to my gym during the rain I thought I’d see what actually went on in that music-pumping converted house next door. So Class One.

I turn up, true to form, with nothing but a passing prayer for comfort. No water bottle (yes, sure I’d be fine on the litre I’d necked ten minutes ago), no towel to mop the torrent of Hulk-like sweat and no clue of what was about to happen. Instructor Bonia took me under her wing and strapped me up with a heart monitor, altered my bike and affixed my feet. Luckily there was another newbie so she could flounder with me.

Unluckily, this class was not an hour like I’d thought / hoped / prayed. “So try and keep cycling for the full 90 minutes, just do your best.” Sorry Bonia, the last time I did anything physically taxing for 90 minutes I was in a hockey skirt and there were orange quarters served at half time.

No oranges and no intermission. This should be good.

Blind ignorance and poor eyesight meant I mistook my low percentage score as heart rate and thought I was doing excellently.  ‘Look at all these overworked buffoons killing themselves at 87 and 92%.’ That’s because you’re not working hard enough, ejit. You get the idea that it was a sweaty torturous mess for all of 90 minutes, so I won’t bore or disgust you by going into too much detail.

Now with that glowing account of physical endeavour you’d assume that I’d take one step out of the door and not look back wouldn’t you? Wrong again. I thought it would be grand idea to do the same thing everyday for a week and write about it. I have graphs as proof of insantiy. 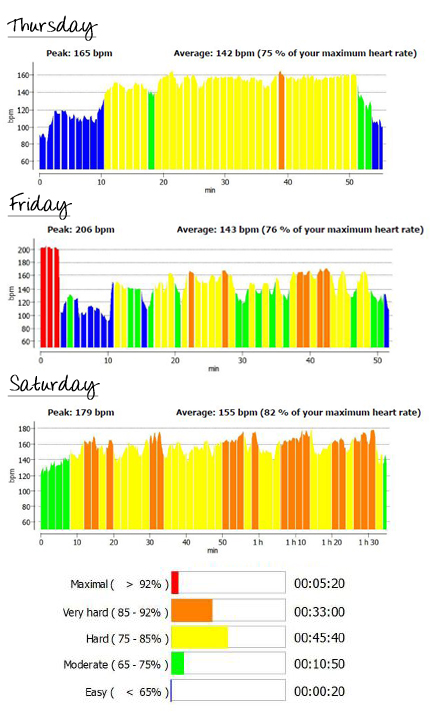 Despite this intense self-flagellation I didn’t fare too badly. No one is more surprised than me.